Spices have always attracted humans from around over the world and even as early as the time of Christopher Columbus. Today the Indian cuisine is as diverse as the European cuisine; this is because of the four different regional styles of cooking in India. There is the North Indian Cuisine (the regions Benaras, Kashmir, Mughlai, Punjab and Rajasthan); the South Indian cuisines (from regions of Andhra Pradesh, Kannada, Kerala and Tamil Nadu); East Indian cuisine (regions of Assam and Bengal) and Western Cuisine from Gujrat Maharashtra and Goa. East region specialized in their cuisines based regional different in spices and the staples that are dominant in that region. 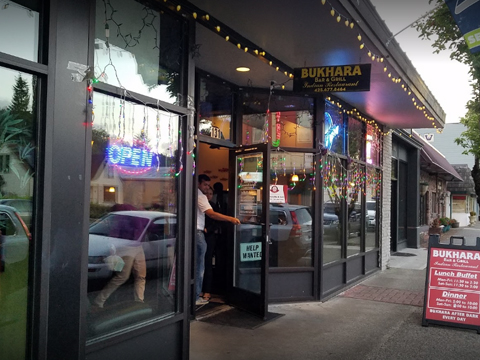 At the Bukhara Bar & Grill restaurant we bring you the best of Indian Spices as we prepare the finest Indian cuisine taste for you. In our cuisine we will bring a large variety of appetizers, entrées (meat & vegetarian), side dishes plus desserts to meet the taste of South Asian savory all in one place for you. Everything is made with fresh ingredients daily to give you the best Indian food experience. At Bukhara, the customer is the most important aspect of our business, and we were recognized as the "People Love Bukhara Bar & Grill" restaurant on Yelp.But it goes further then that with a great location, fine dinning atmospher, amazing food and a great selection of drinking. Our chef's not only be serving both quality interpretations of classic dishes however, they are daring to adapt new ventures in the Indian cuisine world of fine dining.

Bukhara's interior is designed to reflect the surrounding area in Issaquah; and with the goal of showcasing this beautiful city. The seating in the restaurant offers the choice to observe of what is happening on Front Street through our the glass windows, or watch the art of mingling as it occurs in our open-bar atomsphere.

Arabic word that means "permissible” is referenced as Halal. In context of food, it means that food according to Islamic law is permissible. In order for meat to be certified "halal," it cannot be a forbidden cut of meat; such as meat from hindquarters or meat as pork.

There are certain guidelines that have to be follow as illustrated below in the slaughter animal to be called halal: 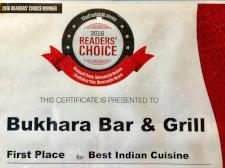